This 2016 performance has passed

These three gentlemen have rearranged the immortal melodies of the Liverpool quartet, readapting them into a wider-ranging, symphonic structure. Their superb arrangements use traditional instruments in new ways. Think the Beatles in tuxedos.

… The Trio’s interpretation of the Beatles’ melodies were transported into another dimension, naturally crossing through Mozart, Beethoven, Bach.. and jazz…Corriere Adriatico 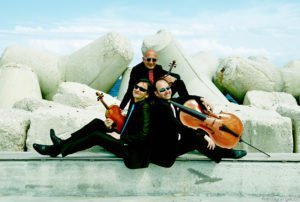 Founded in 1995, the Trio Lennon is composed of renowned Italian soloists and performs a repertoire that ranges from classical and romantic with influences from the Vienna School to contemporary and American music including works composed for the Trio itself.

The Trio members are recipients of high honors and awards and are winners of top prizes at international music competitions. They received favorable reviews from major newspapers and their music was featured on RAI Television and radio. Trio Lennon will enchant you with their harmonious phrasing.

As soloists or as ensemble the Trio members have appeared throughout Italy and Europe, Canada, Japan, Argentina, South Africa, Thailand, Oman, Egypt, Israel, Turkey and the United States. In 2014 Trio Lennon toured along the East Coast including performances in New York, Washington, Buffalo and Niagara Falls.