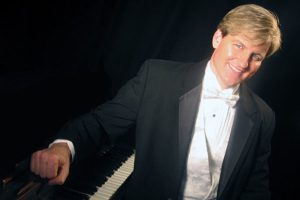 Hyperion Knight is a pianist with a romantic touch. Known for the diversity of his repertoire, he is equally at home in serious classics and popular standards. Hyperion’s recordings range from Beethoven to the Beatles, Ragtime to Rachmaninoff, and in addition to regular appearances with orchestras across the United States, he has been a featured entertainer at Manhattan’s Rainbow Room and Essex House.

A Gershwin enthusiast, he has recorded two CDs devoted to unique arrangements of Gershwin’s music, and frequently performs both Rhapsody in Blue and the Concerto in F, most recently with the symphony orchestras of New Jersey, Wisconsin, Santa Fe, Long Beach, Tennessee, St. Joseph, Johnson City, Grand Forks, New Mexico, California North State and Cheyenne. Hyperion also makes frequent concert presentations on luxury cruise lines such as Seabourn, Holland America, Oceania, Celebrity, Crystal and Silversea. He was recently given the honor of being named Silversea’s “Entertainer of the Year”. Born in Berkeley, California.

Hyperion graduated at age 19 from the San Francisco Conservatory  of Music. By the age of 22 he had received both a Master’s degree and a Doctor of Musical Arts degree from the Cleveland Institute of Music, and was awarded the Arthur Loesser Prize upon graduation. Hyperion now lives in New York City where he studied with members of the Juilliard faculty and made his New York concerto debut playing the Saint-Saëns Piano Concerto #1.

Not since Heifetz has anyone played Gershwin solos with this much
panache…the songs glitter like jewels against black satins. American Record Guide

From The Maui News – “A consummate showman, Knight has a caressing, liquid touch. His hands skim over the keys, often creating a shimmering sound as if the keyboard were ice and the musician the skater. At the same time, each note is articulated, crystalline.”