Born in South Carolina, the son of a Presbyterian minister and a mother who sang her way through college during the Depression, Mac Frampton started playing the piano at the age of three. His formal training began at age five and he was eight years old when he made his professional debut. After his musical studies at Erskine College, he did graduate work at the Cincinnati Conservatory of Music where he received the degree of Doctor of Musical Arts.

Based on classical technique and drawing liberally from Jazz and Rock, the “Rock-Alternative” sound of Mac Frampton continues to build a wider audience with every concert. He has teamed with Roberta Flack, Victor Borge, Louis Nye, The Fifth Dimension, and Metropolitan Opera star Roberta Peters, among others.

Over the years, he has mounted productions on the music of Cole Porter and George Gershwin, as well as several Broadway shows. Mac Frampton has recorded 22 albums and a motion picture soundtrack. Miss this and you will miss a great performance. 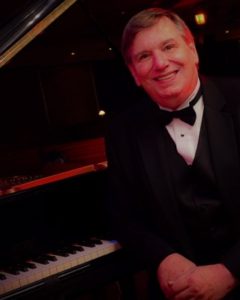 As a boy, his dream was to play the piano just like Roger Williams.

As a teen, he sought to be liked. Admired. So he entered a Key Club competition that took the small town Southern boy all the way to the big stage in Long Beach, California, where he received the top international award from the iconic Pat Boone. Where did Mac Frampton realize the undeniable passion to perform? On that stage in California.

As a young man, he yearned to have a career as a performer. The Van Cliburn International Piano Competition beckoned, where the great Van Cliburn listened to him and said, “You have a career.”

As a performer for the better part of four decades and counting, Mac Frampton has played the huge arenas and the concert halls, soloed with the great orchestras, released over 25 recordings. His number of return engagements is unprecedented.

Mac has been guest soloist with such symphonies and orchestras as the Boston Pops, Mantovani, St. Louis, Milwaukee, New Orleans, Cincinnati, Jacksonville, and Atlanta.  He’s shared the stage with Glen Campbell, Roberta Flack, and many others.

Watch Mac Frampton in Concert Below